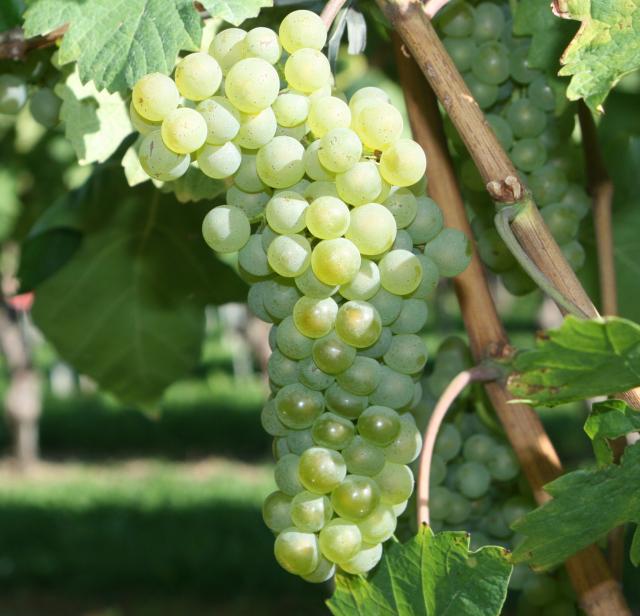 Savagnin /Heida / Traminer / Païen - this is a grape variety you find all over the Alpine regions and further afield. It has so many names you know it is ancient and major

Together with Pinot Noir and Gouais blanc the ancestor of much modern wine.

For me it is one of the great white wine varieties, up there with Chardonnay and Riesling, producing great wines on several continents and able to go from sparkling to dessert with great ageing potential.

If you haven't tried the Swiss and Austrian versions, you owe it to yourself to try. Valais Heida in particular is an incredibly impressive expression of the grape. It's the altitude and the age of the vines, and perhaps the particular subvarieties they kept alive there.

It's also a most Alpine variety, having originated on the Italian, South East side but thrived on the North and West sides.

PS: The more exhuberant Gewürztraminer is a closely related mutation (essentially the same) but different enough to warrant its own page.

The origins of this grape are not without debate. It most likely began in north east France and south west Germany, though some believe that it is from Egypt and others, with no botanical proof, say that it is not from Vitis Vinifera but from Vitis Aminea or even other strains of Vitis.

Heida is the parent or grandparent of an impressive line-up of offspring, Sauvignon Blanc, Chenin Blanc, Silvaner, Neuburger, Grüner Veltliner, Verdelho and Traminette, among many others. It is related to Pinot but the parent/offspring relationship cannot be defined.

In Switzerland it is grown only in the Valais, principally in the vineyards around Visperterminen at an altitude of some 1100 metres above sea level, where the Föhn, a warm southerly wine, helps ripen the grapes. This is a truly old variety. The first written records date from 1586 when it was referred to as "Heyda", but it has been in use much longer. Indeed, the name Heida itself is local patois for "ancient" or "from an earlier time" and the French name "Païen" descends from "Pagan", i.e. before Christianity.

Plantings today are still limited with just some 15 hectares in commercial production. In the vineyard, Heida's grapes are small and compact and are yellowish and aromatic. It ripens mid-season, later than Chasselas, but before Petite Arvine. Heida makes, in my view, some of the best Valaisan white wines which can be complex and powerful, with exotic fruit flavours including quince. Heida ages quite well and should last 5 years without problems. They can also be versatile when food matching, going well with many vegetable dishes, cold meats and fish.

Most Traminer in Austria is either Roter Traminer or Gewurtztraminer. There is, however, a rare grape called Gelber Traminer. Do not expect to find any Traminer on our website. Have a look at the details for each wine and see what it really is!