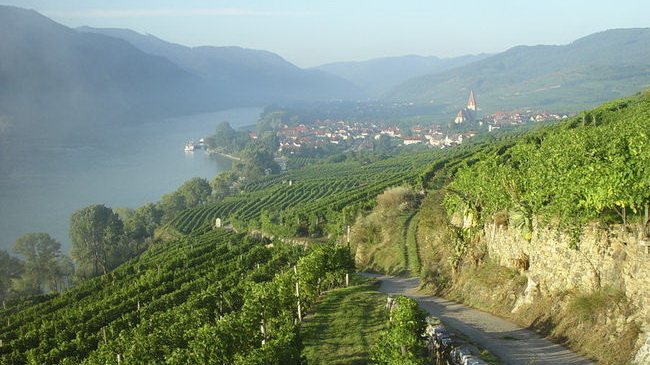 The Wachau is a region along the north shores of the Danube to the west of Vienna. It is an area of outstanding beauty with dramatic scenery along the Danube river valley. It is centred around the Baroque masterpiece of Melk and stretches for some 30km, encompassing towns including Spitz an der Donau, Joching, Weissenkirchen, Dürnstein, Loiben and Mautern.

It is also widely accepted as the source of the most desirable Austrian white wines. Not only are the wines sublime, but the countryside is also beautiful, with apricot orchards and steep terraced vineyards on both sides of the river melting harmoniously into medieval villages, with the Danube itself, some 200 metres wide here, providing a majestic backdrop to the beauty of the region.

The western end of the Wachau with cooler night time temperatures has the most elegant wines while the fuller-bodied and more powerful examples come from further downstream peaking around Loiben and Dürnstein.

The very best Wachau wines are however scarce, given the cult status of many producers.

The Wachau has 1,390 hectares of vines, planted in soils of weathered primary rock, sand and loess. In addition to Riesling and Grüner Veltliner, other typically Austrian varieties grown here include Neuburger and Gelber Muskateller. The "Vinea Wachau Nobilis Districtus" is the local association to which most local winemakers belong and which defines the classification of Wachau wines - Steinfeder, Federspiel and Smaragd.

The geology in the Wachau is based around soils derived from primary rock, known here as urgestein. This is composed largely of granite, gneiss or mica-schist, although the composition varies somewhat throughout the region. With slate in the west around Spitz, more loam in around Weissenkirchen in the central Wachau and then in the east around Krems, the gateway to the Kremstal, some limestone.

The climate in the Wachau varies quite significantly over short distances and is quite interesting. At the western end around Spitz, it is cooler, as here cold winds can blow down from the mountains, so the wines are more fragile and have more of a nervy steely character than in the east. In the east where the land is flatter, the climate is starting to become affected by the Pannonian climate of the great Hungarian Putsch near the Austrian/Hungarian border, around the Neusiedlersee this is much more pronounced with bitterly cold winters and hot arid summers.

Everywhere in the Wachau the climate is moderated by the proximity of the river, although it can be very dry in summer and limited irrigation is permitted. Because of the differences in the climate the harvest date also varies, being a bit earlier in the east than around Spitz.

The Loibenberg and Steinertal hill is the hottest/most sun exposed vineyard in the Wachau - you can tell!

The most typical varieties in Wachau