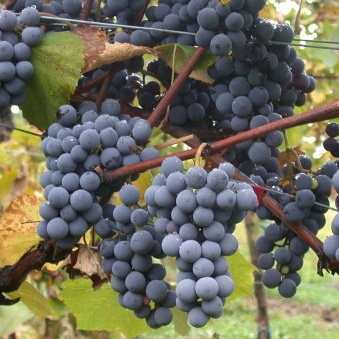 Cornalin is a traditional Swiss red grape variety grown in Valais. Cornalin gives fruity red wines with an elegant bouquet and an intense crimson tinted purple colour. Typical flavours are sweet cherries, raspberries and red currants often with a floral touch such as violets, or a herbal note like raspberry leaves.

Cornalin's fruitiness is more like Merlot than Gamay, but its acidity is right between the two so you should expect a Cornalin to have good structure. Its touch of bitterness and rusticity, which depends enormously on the vintage, is reminiscent of Mondeuse Noir from Alpine France.

Rouge du Pays is almost certainly from the Val d'Aosta in Italy as its parents are Petite Rouge and Mayolet. However, Rouge du Pays has only ever been found in Valais in Switzerland, where it has been grown for centuries.

It is a rather capricious grape and alternates between heavy and light yields, so it requires a lot of work in the vineyard. Starting in the late nineteenth century it was slowly replaced by Pinot Noir and Gamay and was almost extinct by the early 1970's. This is when the variety was revived and renamed Cornalin, taking the name of a variety thought to be extinct. Ironically the original Cornalin was alive and well in Valais under the name Humagne Rouge but that wasn't known until decades later from DNA testing.

With DNA testing, we now know that Rouge du Pays is one of the parents of Humagne Rouge. We also found out that Humagne Rouge is, actually, the lost variety which was called Cornalin. So yes, Cornalin is the father of Cornalin.

You may see people using "Cornalin d'Aoste" and "Cornalin du Valais" to make the distinction between the two uses of Cornalin, but if you know which country the wine is from there really isn't any confusion. Cornalin from Switzerland is this variety here, the grape formerly known as Rouge du Pays. Cornalin from Italy will be its child, the grape known in Switzerland as Humagne Rouge.