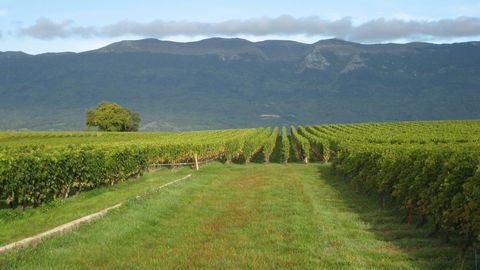 Despite being one of the smallest cantons Geneva is actually the country’s third largest wine growing region.

Broadly speaking, the wines made here are at their most full-bodied and strongest in the Mandement district to the west of the city, becoming softer and lighter as you move anticlockwise around the end of the lake. Although the Chasselas still dominates the white vines, Geneva's winegrowers are increasingly winning awards at international wine competitions with classic grape varieties, as this is good for local restaurant sales.

Gamay is by far the most widely planted red variety, outstripping the next two most common red varieties combined. Gamay is excellent in Geneva, richer and smoother than Beaujolais with a little spiciness. Pinot Noir is also popular as it is everywhere in Switzerland, along with Gamaret and Garanoir (two red crossings designed specifically for Switzerland).

White wines are based on Switzerland's favourite white variety, Chasselas, which accounts for more than half of the white wines. Geneva Chasselas is usually fruitier than the more mineral Chasselas found in Vaud and Valais.

After Chasselas, the next most commonly planted white variety is Pinot Blanc, followed by Pinot Gris. Other grape varieties include Pinot Blanc, Riesling, Gewürztraminer, Scheurebe, Aligoté and Viognier. Increasingly, winemakers are planting Chardonnay and Sauvignon Blanc as well as Sauvignon Gris.

In total there are around 1,340 hectares of vineyards dotted around, just a few miles from the city centre and accounting for about 10% of national production.

The vineyards around Geneva are sandwiched between the Jura Mountains to the west and the French Alps to the east and are separated into three officially named areas.

Hermance, Choulex and Jussy are the three main wine viticultural communes here, separated by a matter of metres from the vineyards of France's Crepy appellation and only a little further from Ripaille, Marin and Marignan of Haute Savoie.

A small sub-region, it occupies an area immediately south and south-west of the city, in an arc formed by the Arve river to the east and the Rhône to the west.

Bardonnex and Lully are the two main viticultural communes, with the vineyards of the latter separated by only 16km (10 miles) from those of Frangy in upper Savoie.

Mandement (sometimes Le Mandement) is the largest of the sub-regions. It accounts for roughly two-thirds of the region's vines. It occupies an area immediately west of the city, at the feet of the southern 'forest mountains' of the Jura.

The main concentration of vines here is in the parish of Satigny, largest Swiss viticultural commune with 480 hectares of vineyards (possibly the only flat viticultural wine commune in Switzerland). The villages of Bourdigny, Peissy and Choully have the best vinous reputation locally and internationally, with the latter two being home to vineyards classified as Premier Cru under Switzerland's French-style appellation system.

Geneva was the first canton to introduce and adopt laws about the production of wines with the Appellation d'Origine Contrôlée - AOC (controlled term of origin).

Cardoon: The cardoon is a thistle-like plant, a member of the artichoke family, although you eat the stalk and not the flower. Cardoon gratin is a classic Geneva Christmas dish. Only brave souls should to try to prepare them because they are prickly and the preparation can be long and tedious (it's like the chard equivalent of quince). Many farmers markets in Switzerland now sell them prepared in plastic vacuum-packed packages, which is probably the best option.

Omble chevalier: Known as the ‘noble one’ from Lake Geneva, the Omble chevalier (a close relative of Arctic char) is the most noble and the best of all the different fish for everyday consumption. Geneva chefs pay due reference to this fish from the Lac Léman by serving it with the famous Sauce Genevoise, a delicate local sauce made from white wine, fresh herbs, butter and a drop of cream.

La Longeole: If you have read the other regions description, you won't be surprised to find that Geneva too think they have the best saucisson. The people of Geneva love their longeole – according to them the most packed and substantial of all Swiss sausages. It is made with gelatinous pork and flavoured with a spice mixture containing fennel seeds. This monumental sausage must be simmered for three hours before being served, traditionally with boiled potatoes and lentils. It is especially popular during the colder months and is of course an essential feature of Geneva's famous Escalade festivities when the aroma of Geneva longeole wafts up from every street corner.

Rzulé (pear rissole): Dried or condensed pears are a common Swiss staple, and are in Geneva too. The age-old Geneva and Savoyard specialty called rzulé in the local dialect, better known today as rissole aux poires, was nearly extinct not so very long ago. The dish consists basically of pears braised until they caramelise and which are then used to fill a pastry. The result resembles a fried apple turnover or chausson, even though it is baked.

In Geneva food is serious. With over 1,000 restaurants, the city is the undisputed capital of cuisine in Switzerland.

In the Old Town, traditional Swiss eateries and cozy French cafes are tucked into every corner. Many offer a romantic candle-lit atmosphere in a uniquely medieval setting. Reservations are recommended due to limited seating at the more refined cafes.

The hotels along the lake front feature some of the most decadent restaurants in Geneva with stunning views and first class service. Formal dress is encouraged in the evenings.

Around the business district and the train station modern restaurants cater to the demanding business customers, and in districts like Carouge you will find the most trendy and diverse international cuising, as well as more experimental eateries.

Château de Peney (part of the exclusive Relais & Châteaux group). It stands proudly among Satigny’s vineyards. Owned by Magali and Chef Philippe Chevrier, the menu is extravagant, with a price tag to match. The ambiance is created by the original 16th century architecture in the main dining room, cobbled walls, a period fireplace and solid wood furniture. For a more intimate experience the cellar features a single dining table, where guests can enjoy their meal among displays of internationally prestigious and locally produced vintage wines.

Auberge du Lion d’Or Michelin star restaurant. Thomas Byrne and Gilles Dupont have been described by Relais & Châteaux as the ‘tightrope walkers and choreographers of gastronomy’.

Set in a tantalisingly soothing location with views over Lake Geneva, the cuisine is creative and streamlined. Maintaining a smart and classical décor, the Auberge du Lion d’Or amplifies the attention towards the dishes. Sharing their ideology of creating edible masterpieces. You can also book cooking classes for parties of between six and eight. The restaurant is closed on Saturdays and Sundays (www.liondor.ch)

Café de Paris - recommended by several of our customers. Does mostly one thing, entrecôte Café de Paris, but does it as well as anywhere in the world.

Every 12th of December, Geneva organises the Escalade Festival. This is the traditional commemoration of the defeat of the Savoyard troops who attacked Geneva on 12th of December 1602.

Children sing the song ‘Ce qu'e laino’, whose words in old Genevan dialect, tell of the events of 1602. In fancy dress, they go from café to café while members of the Company of 1602 patrol on horseback in traditional costume, complete with pikes and lances.

The climax of the weekend is the torch-lit procession, where more than 1000 people wearing period costumes parade through the dark streets of the city, ending up in the cathedral square for a bonfire.

L'Escalade is even celebrated in London every year.

Vintage boats, some going back to the 19th century, sail on Lake Geneva. The ancient lateen -sail sailboat is probably the most symbolic witness of intense trade navigation on Lake Geneva.

Boats are restored or reconstructed according to authentic period blueprints, La Vaudoise, La Neptune, La Savoie, L’Aurore and La Liberté. At one time totally dedicated to the transport of merchandise, today they sail for the sheer pleasure of their passengers. The spectators can take full advantage of a dream cruise on one of these vintage lateen sailboats of Lake Geneva. Alpine horn, wine-tasting or fireworks display cruises make up an elaborate and colourful programme! (www.leman-tradition.ch)

The 140 metre high Jet d’Eau is the most emblematic of Geneva’s symbols. In 1886, a hydraulic power station was built to deliver water under pressure from the Rhône to the city’s fountains, households and factories. One evening, pressure build-ups forced the engineers to install a special pressure relief valve. This marked the birth of the Jet d’Eau. The ephemeral work of art soon became a tourist attraction.

This museum is an honoured institution in Geneva, and a proud creation of two Swiss philanthropists. The museum details, through visual and audio exhibits, the atrocities perpetuated by humanity. From World Wars and genocide to political scandals and devastating scientific creations, this museum was created by Henri Dufour and Henri Dunant in 1864. Their aim was to provide people with facts instead of propaganda about world affairs, and then let the people come to their own conclusion. Fantastic if you enjoy learning about historical events that changed the world.

Chamonix is a long day trip from Geneva, or better two. As one of the most famous villages in the French Alps, Chamonix is laden with history. Take the Aiguille du Midi cable car, with the view of Mont Blanc and the rest of the Alps the most rewarding part of the whole trip.

If you can't make it all the way to Chamonix you can make it to Geneva's own iconic mountain, the Saleve. The view here is over the lake Geneva area and the foothills of the Alps. This is an outdoor sports paradise but go prepared, as the area is a maze of paths and canyons.

The headquarters of fundamental physics in the World, CERN has a small exhibition in a globe building that can be visited to get a peak at the cutting edge of science.

The Wine Route in Dardagny

A lovely walking path in the vineyards