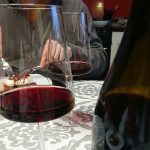 Sometimes we have to stop selling a wine because there is too much variation from bottle to bottle. These often come into our home cellar. This happened with the Beaujolais Villages Les Larmoises 2007, taken off list 3 years ago after reports of a disappointing bottle.

The Larmoises was a lovely old vines vineyard, which Vincent Lacondemine had to give up after the 2009 vintage. Vincent found the Chapital vineyard as a replacement, which has given us many joyful bottles, but I still would have loved to have Larmoises a few years longer.

Of course, since we took it off sale, the last 3 bottles all have been excellent. I've been drinking one a year.

We had the Larmoises 2007 with a classic style pot au feu. I love Gamay with pot au feu, because it's a wine which can handle the mustard. Any mustard!

I didn't know what to expect - but what I didn't expect was to hear Robb go "Oh Wow" - Robb is a man of, how can I put it? subdued enthusiasm, "it's not bad" is quite a bit of praise already!

So yes, oh wow. Not a big nose, quite discrete but pure with tingly minerality. And once you drink it it was indeed wow! delicious pomegranate with a touch of tobacco and we catch the ghost of tannins. They're so soft they are barely there but you can tell the wine would be different it tannins hadn't been there.

I'm not sure what I'd guess in a blind tasting...


I have one left and I think I'll give it another year. Or maybe not, it was so light and fresh I might drink it this summer.

Obviously 2009 is a vintage for the ages, and here it shows.

It still matches its original tasting notes, a perfumed nose with blackberry, violets and kirsch, with good depth of flavour and a velvety texture.

We had it with Oeufs en Meurette, with a red wine sauce made of Gamay too.

The Larmoises 2009 is beautiful and still solid as a rock, so it remains happily available to buy on the site.

There are 9 bottles left on May 10th

We always make lots of red wine sauce and freeze it in batches so we can whip up quick mid week meals that still feel like luxury. Toasted bread, poached eggs, lardons, job done.

Categories: tasting
Tags: at our table & tasting
Posted By: Joelle
Contact Us