MARCH FOR THE INDEPENDENTS 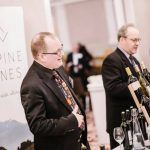 On Tuesday 3rd March, Robb and Ben took an early train and went to St. Ermin’s Hotel, London, for Harper’s March for the Independents event.

We had with us the following wines:

It was interesting and a little challenging for us to decide the order of tasting as there are some outstanding aromas and tastes in that flight. In the end we had the white and the red sorted but the two rosé wines proved very troublesome and had to be split up as tasting them together, whatever order we tried, resulted in the first wine being lovely and the second wine seeming dull in comparison. Eventually we split them up and had one after the whites and the other after the reds. This worked much better and it was nice to be able to taste the Blaufränkisch 2013 directly after the Rosé of Blaufränkisch Reserve 2014.

The event was quite different to those we usually attend as it was mainly focussed on debates and talks concerning the independent trade. This meant that the tasting room was pretty empty for much of the day. When there were breaks in the talking, however, the wines we took were very well received.

As always, Doral made an impact on everyone, most of whom had never had this delicious grape before. The Triebaumer's two wines were on top form with the rosé seriously impressing many, including Fiona Beckett who found it delightful. She was also impressed with the other nine wines but it was the Blanc de Savoie that stood out the most for her and she has written about it in the Guardian Weekend magazine's wine column on Saturday 21st of March.

The new vintage of Rubin Carnuntum is at least as good as its predecessors so do not expect it to last long on the website. 100% Zweigelt and absolutely lovely.

Heidi Schröck has produced a new range of sweet wines this year and her Susse Löwen Spätlese is quite divine. Plenty of citrus in the sweetness and all perfectly balanced.