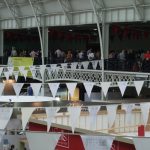 Joelle, Robb and Ben arrived in good spirits on Monday 2nd June at Olympia for the London Wine Fair 2014. After 14 years in Excel, the Fair had been rebranded ("International" removed from the title for a start) and brought back to its roots in Olympia. As a new venture, which will continue due to its astonishing success, independent retailers and winemakers were able to have a stand within the area called Esoterica. On our left there was also an area for the brewing trade with some independents in brewing and beer retail. There was no separate area for spirits but they were dotted around the Fair also. 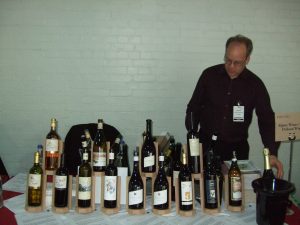 Our good spirits were strained very thin as the day wore on. We had brought a few bottles with us but the bulk of our products were due to have been delivered by 9.00am ready for the doors to open at 10.00am. Unfortunately, due to a road traffic accident, they did not arrive until just after midday. This meant two things: First, we had to cope with keeping people interested when we had only four wines to show. Luckily that worked. Secondly, because the Fair had started, we could not use a trolley to bring our wines from the ground floor to our stand on the opposite side of the venue and up one level. Robb and Ben performed a strongman relay carrying cases alternatively while the other guarded the pile and rested. We got them all up eventually and put the whites on ice. Frankly, Robb and Ben also needed to go on ice!

After all that mental and physical strain, the rest of the Fair went swimmingly. We were in a pretty good spot and had a lot of visitors. There were quite a few who looked at the bottles and had to be convinced to come and have a taste, usually saying "Well, just one or two", who then tried the entire range with growing pleasure and excitement. The quality of the wines and the skill of the winemakers shone through and we soon found more people coming because someone had recommended Alpine Wines to them.

The daily tastings went down well, especially the 'Top Swiss Wines' which showcased some extraordinary flavours. For most, apart from the quality, it was being able to experience a large range of new and rare grapes that caught the imagination. If all the sommeliers that raved about the Gamar'One decide to order it, we may have a bidding war on our hands!

It quickly became evident that Esoterica was the big buzz at the Fair and a huge number of people came through each day. Over 10,000 visited altogether and I am sure we met most of them!

Despite ending up exhausted and with seriously complaining feet and legs, it was an excellent Fair. We were delighted to see Gilles Besse from Germanier, who stayed and chatted with many of our visitors as they tasted four of his wonderful creations. One of Ben's highlights was tasting the Taylor's 1863 Port. Astonishing stuff! Of course, we also got to taste wines from around the world and from some other companies. An honourable mention must go to our friends at Red Squirrel Wine for their constant smiling and excellent wines. Many thanks are also due to Judy Kendrick for her marvellous planning and looking after our every whim, not to mention her admirable sidekick, Zoe Blanchard.

See you in Olympia next year!