It is a far, far better thing to sleep until the sun has risen than to crawl from bed at 3.30am to enable you to catch a flight to Vienna. Sleep aside, however, the end definitely justified the means.

Joelle, Robb and the wine-dog, Ziro, had gone on ahead a few days earlier, by car. On this trip I was able to bring my wife, Wendy, and we arrived in Vienna airport and had breakfast while we waited for Robb to appear in the vehicle to pick us up. Vienna airport was hosting a bollard convention and the delegates were out in force, making the surrounding area appear like a cone-themed battlefield. We walked away from the terminal and found a quiet spot by a roadside to call Joelle. Before the call was made the car, miraculously, appeared. A wonderfully serendipitous moment for us all. 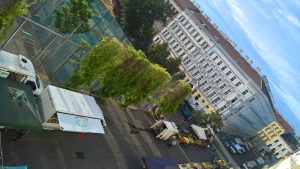 Having arrived on Thursday and VieVinum, the large Austrian Wine Fair, not due to officially start until Saturday, we made our way to the Airbnb accomodation arranged. Two very simple but pleasant self-contained flats with sufficient facilities for breakfast making, overlooking a square which was the heart of the local community.

At any time there were people meeting, eating, drinking and relaxing there, playing boules, football, cycling and even using the outdoor table-tennis table! It was really nice to see a community coming together. There were small cafes and restaurants along two sides of the square and market stalls sprang up overnight in various places, enabling us to buy fruit, eggs and milk any day. 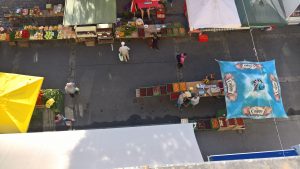 One drawback was being woken at 5.00am as they erected their stalls! Having said that, sleep was far from easy as it was terrifically hot. Leaving all the windows open helped a little with the heat but allowed the noise to enter. We eventually kept the windows open during the day and shut most at night.

Although VieVinum was not officially starting for two days, they had laid on a reception on Thursday evening for visitors from outside Austria. On a platform on the river there was a huge barbecue and around 75 wines to be tasted. The hospitality was incredible and would continue to be so throughout our time in Austria. We were, of course, delighted to see quite a few wines from ‘our’ winemakers. 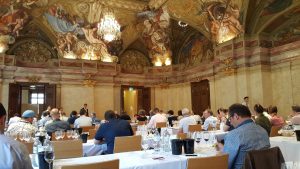 The next day, Friday, was another on which we had pre-VieVinum offerings. We went to one of the many palaces in Austria, the Palais Niederösterreich, where we entered one of the most astonishingly beautiful rooms to take part in a ‘flight’ tasting.

There were 15 flights, each consisting of 4-6 tastings of Sauvignon Blanc, Weissburgunder, Grauburgunder, Chardonnay, Pinot Noir and/or Sankt Laurent. There were a large number of staff on hand as the room contained as many as one hundred tasters, each going at their own pace. We were each allocated a number and had to write the flight number on a card and hold it up. Someone would come and take the card and, very shortly, another would appear with a wine bag containing the bottles from the nominated flight. Once tasted and notes made, the process would repeat with another flight.

Comparison is vital to keep us honest, just as are customer reviews on our website! 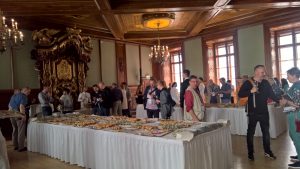 Following the tasting we were offered a light snack. How we laughed when we entered a room groaning with a vast amount of food, all delicious, and further wines to drink with it. The hospitality had been notched up some more.

We had a very informative and enjoyable time at the tasting and learned, for the first but not the last time that week, that regardless of any new discoveries, our selection of wines available in the UK were well made. Some of the offered wines were good, many were nice but few were of the standard that we look for. 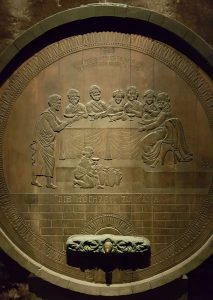 Following the tasting, Robb, Joelle and Zero drove us to Stift Klosterneuburg, the beautiful and imposing monastery which has been making wine for just over 900 years.

Thanks to a slight language mix-up and some crafty selling, Wendy and I found ourselves on a guided tour of the buildings and the cellar (which was the part we really wanted to see). It was fantastic.

Such a beautiful place both inside and out. I heartily recommend it to everyone. The tour concluded in the shop/tasting room with a taste of a couple of wines. At that point the group left, apart from us, of course! We tasted a few more of the wines and discussed them.

Once we had established our credentials as importers of their wines, they were very amenable. We didn’t but any wine but there may have been a bottle of hazelnut spirit and some Sankt Laurent brandy in the return luggage!

Saturday to Monday was VieVinum. I know it is a privilege to work in wine and many people get jealous of our opportunities to taste wine all day, every day, but it is actually hard work. The sheer volume of wine does affect your ability to taste and this, coupled with the intense heat outside and the even hotter interior made enjoyment much harder than you might think. 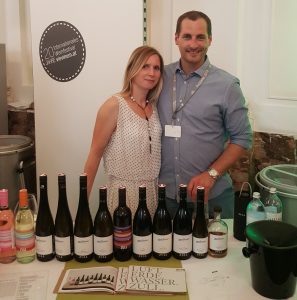 The Fair took place within the Hofburg Palace and covered two floors and a large number of rooms. Winemakers were in rooms by region with a few extra rooms for young winemakers, guest countries (Switzerland was the main guests so we were able to meet up with a few of the winemakers we import into the UK) and even, to our surprise, Strongbow Cider! Sadly, the Strongbow product we all craved ran out very quickly. They had brought a supply of lovely Chinese-style fans!

On the first evening (Saturday) there was yet another get-together – The Big Austrian Wine Party. Instead of a palace, this was held in a Wine Salon. Luckily, there were still plenty of chandeliers! There were three large rooms and a spacious veranda. All were quickly filled but there was sufficient room to obtain more magnificant food and wine from four different service points, each highlighting different regions of Austria. First a string quartet and then a jazz band played throughout and a wonderful soloist sang beautifully.

Lowlights: The soloist declined to sing “Over the Rainbow” for me. :(

Over the three days of VieVinum we walked a few miles both on the flat and up and down flights of stairs. We saw more chandeliers than I have ever seen before set in the most magnificent halls. It was exhausting but, thanks again to the hospitality of the Austrians, we had access to the press room which was a haven of coolness, cold water and mobile phone recharging stations. 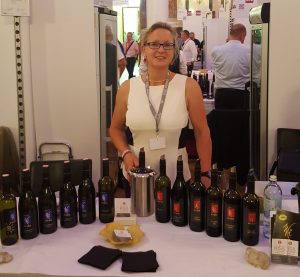 During the three days we visited all the winemakers we import or have imported in the past and plenty of others which allowed us, once again, to compare wines from the same region with ours. It is very pleasing to note that very few got us excited other than those we already import. One exception cam by another act of serendipity. On the final day we were looking at sweet wines and Wendy had been chatting to a couple of people in the press room who mentioned some strohwein in the “young winemakers” area. Robb and I went to have a taste and were very impressed buy one particular red sweet wine. After Wendy and I had flown back to the UK, Robb and Joelle paid their winery a visit. We remain impressed by that wine and a few others they had to offer. Watch this space!

On the Sunday morning, Wendy and I took advantage of our location and went to Mass in the palace chapel. The choir was the world-famous Vienna Boys Choir with a full orchestra and some men to sing the lower parts.

The mass setting was Mozart’s Ursulenemesse. He wrote it when he was 12! It was sublime but, at first, rather odd as we could hear the music beautifully but could not see the choir! Eventually we worked out that they were on the balcony above our heads and so out of our view! The acoustics were such that there was no indication they were there.

Again I recommend anyone going to Vienna to book for such an occasion.